The lobster roll. It is the ocean’s answer to the hot dog. Here in New England, the lobster roll is about as ubiquitous as it is contested, with each little shop having their own method to creating “the best lobster roll.” Arguments erupt over what fillings (if any) should be used and the perfect ratio of mayo to lobster. Every year there are a bunch of new articles published in various food magazines and regional periodicals listing the top places for lobster rolls. And while these rolls are delicious, they are also pretty expensive, costing anywhere from $15-$25. So it’s best to make an educated decision—order only from places that are known for their rolls. The last thing anyone wants is an over-mayoed and under-packed, overpriced yet underwhelming lobster roll.

There are two methods to lobster rolling. The first and most common—lobster meat mixed with mayo and some white pepper. Some people throw in celery or some other junk, but I’m a bit of a purist. I don’t want much getting in the way of my lobster. The second method is a little less conventional—bathe the meat in hot butter. This roll, unlike the other, is served hot. Both are quite good, it’s just a question of what fatty substance you want slathered all over your lobster meat. And while the filling may differ from place to place, the bread housing it rarely does. The humble hot dog bun may seem unfit for the treasured cargo, but believe me, it gets the job done.

Lobster rolls are about as common as democrats here on Martha’s Vineyard. I guarantee you that Barack has at least one while on vacation. If I suddenly get that crustacean craving here, I go to Grace Church, where the lobster rolls are cheap (at $13 plus chips and a drink) and generous. There’s so much meat in these monsters rolls; it’s almost unfair. Grace Church sells these babies every Friday night from 4:30 to 7:30. In the course of one evening, a battalion of spry churchgoing ladies churns out more than 1,000 lobster rolls. Having volunteered there once, I can tell you that their method is quite minimalistic (lots of lobster+gobs of mayo+white pepper served on hot dog buns from the bag), but also delicious.

Last Wednesday I started to get one of those cravings, so I planned on getting a couple of rolls. But then I thought about lobster roll #2 and that delicious hot buttery coating. So I decided to turn this into one of my food projects. When I called in my order, I asked for one container of lobster meat without mayo and one all mayoed up. The two rolls would go head to head, hot vs. cold, butter vs. mayo in a battle royale! 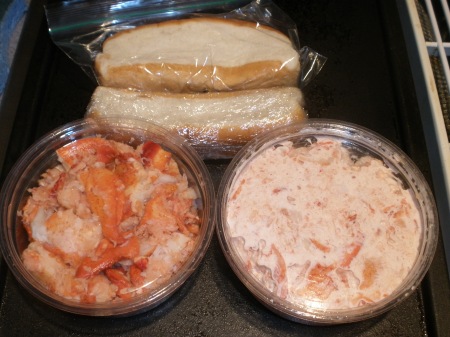 The Ingredients, courtesy of Grace Church

I used a simple stainless steel pan to get the butter nice and hot. For good measure, I squirted in a little lemon juice. The butter didn’t brown, but it had acquired a taste subtly similar to “beurre noisette.” I added the lobster after turning off the heat and shook the pan until the lobster was totally coated. I plopped the meat inside the roll and drizzled the leftover lemon butter on top. This is best served nice and hot. My brother and I split up both rolls and compared notes. He proclaimed mine as the superior, noting it’s pure, bold, and rich flavor. I should note that he loves everything I make—the guy has never met a meal he hasn’t loved. My thoughts: as Miles would put it: quaffable, but not transcendent. But a damn good lobster roll nevertheless.

This entry was posted on Tuesday, August 25th, 2009 at 1:33 AM and is filed under Seafood. You can follow any responses to this entry through the RSS 2.0 feed. You can leave a response, or trackback from your own site.