A Plea for Rhubarb

Rhubarb gets a bad rep. Much like Crispin Glover or the new GI JOE movie, rhubarb is the victim of much undeserved derision and dislike. A lot of people claim to “not be fans of rhubarb,” but have never actually given it a chance. Perhaps it’s the name. The two syllables are not very appealing individually. The first bears a phonetic resemblance to the prefix “rheu,” which connotes some inflammatory disease. Barb is equally unlikable. Barb-wired fence, barbarian. Basically any barb is bad news bears in my book.

Then there’s the fact that it’s a root. Well, I think it’s a root. No, it’s got leaves, so it’s like a stem. It’s like celery in that way, I think. There’s another problem right there! It’s like celery! What is celery used for? It’s a crunchy filler or an anorexic staple. So people look at this thing and say, “Hey, it looks like a red piece of celery. And you make a dessert out of that?!? Gross!”

Let’s have a proper introduction, shall we? Rhubarb is the stalk of a plant, and when cooked, the rhubarb becomes a delightful, fruitlike thing. I sense that you are still a little hesitant. Well, let’s take it step by step. I made a strawberry rhubarb crisp. Pairing rhubarb with a universally loved fruit like strawberry oftentimes quells concerns.

The first step is to prep the rhubarb. After washing them off, I cut off either end and peeled them with a paring knife. Guiding the knife down the stalk toward you, you can easily skin the rhubarb. Try not to take off too much of the rhubarb when skinning it. I hope I explained that properly. Hold the knife as if you were skinning an apple (which I used to do all the time, since I hated apple skin as a kid). Cut the stalks into half inch slices.

Then quarter the strawberries. If they are really small ones, feel free to just halve them. I ended up with a bunch of Hulk strawberries, though.

Combine the sugar and mix it around so that all the pieces of fruit get coated. This allows the sugar to absorb the liquid of the fruit. If the liquid doesn’t make it out, the crisp will bubble over when cooked, and we don’t want that. So give it some time.

The crisp topping recipe is massive. You probably could halve it and be fine. I ended up with a bunch of crisp left, but I know that I’ll end up using it on some unsuspecting fruit in the near future.

The recipe itself comfortably feeds 12 or so people (it begs for a nice side of vanilla ice-cream). Originally, the crisp was made individual ramekins. It works equally well in a big brownie pan. 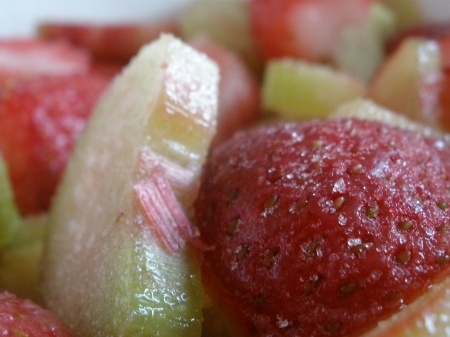 Filling
3 or 4 stalks Rhubarb, peeled (I had the Barry Bonds of rhubarbs, so I just used 3, but I know they all aren’t the same size)
1 lb of strawberries, quartered
1/3 cup of granulated sugar

-Peel Rhubarb, then cut into small (½-inch) pieces
-Quarter strawberries, and add this to the rhubarb in large mixing bowl
-Add granulated sugar and mix in order to coat all pieces
-Let this sit for at least 2 or 3 hours, as the strawberries and rhubarb need to release their liquid. The sugar absorbs a lot of their juices. Collect this syrup in a container, leaving the fruit behind.

Crumb topping
¼ teaspoon of baking powder
3 cups of all purpose flour
1 lb of light brown sugar (I’ve made this with dark as well, so no worries if you don’t have light)
½ lb (two sticks) of butter (partially melted)

-With hands, mix the dry ingredients together in large bowl, getting all the brown sugar blended (remove any of those hardened balls)
-Microwave the butter for about thirty seconds until it’s half liquid and half solid
-Mix this butter in with dry ingredients, blending with hands until the texture is that of wet sand. Lightly rub mixture in between palms, creating small crumbs or balls
-DO NOT OVERWORK IT; some bits of unadulterated butter can be nice

Putting it together
Preheat oven to 350

-Densely pack an ungreased pan with filling
-Cover filling with crumb topping
-Place in oven and bake for approx. 35 minutes, until the fruit bubbles (Note, I like my rhubarb a little crunchy, but most people want it totally soft). An easy way to test it is to use a fork to prick a piece.
-Give it at least fifteen minutes or so to set in place before eating.

So hopefully you can find it in your heart to accept rhubarb into your repertoire. It’s a really tasty plant. So give it a try! As for Crispin Glover, well…

This entry was posted on Sunday, August 9th, 2009 at 8:57 AM and is filed under Desserts, Fruit. You can follow any responses to this entry through the RSS 2.0 feed. You can leave a response, or trackback from your own site.

One Response to Strawberry Rhubarb Crisp